Tea Santa came early this year! I was shopping at Trader Joe when I noticed this all new exciting tea gift set. It costs $10. I pondered but (of course) eventually gave in and bought it 🙂 You get four tea containers with ten tea pyramids in each. That’s 25c per tea pyramid.

It has a long name, get ready for it, it is the Thotalagala Organic Single Estate High Grown Tea Collection! This is not advertised in their Holiday 2017 Flyer, it just showed up in the store!

I just opened the box and took pictures, and wrote this post. I haven’t tasted the tea yet, it’s late night, I won’t be able to sleep if I drink caffeinated now 🙂 But fear not, there will be four separate posts on each one of the included four teas! 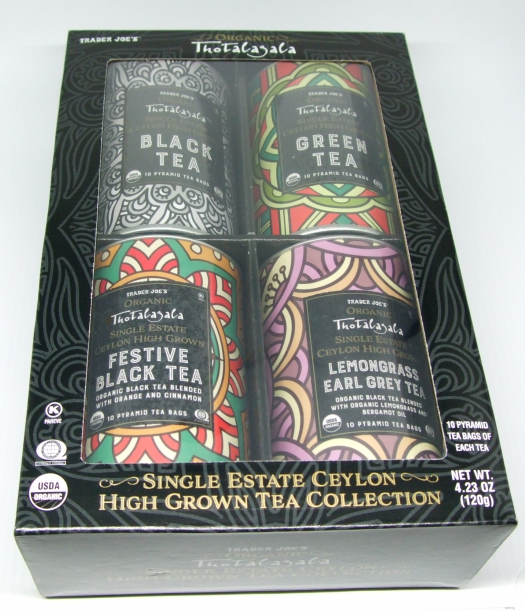 The whole package is sealed-wrapped with some kind of cellophane. I don’t know if there’s a simple way for it to unravel, I just used a little cutter to slice it ~ gently so as not to damage the cardboard packaging and the tea containers. Reflections from the cellophane thing are evident in the picture at the very bottom of this post.

The back of the packaging lists the ingredients for each tea. As you can see, everything is organic. Three of four are flavored. The last one is just Green tea, that’s why there are no other ingredients after its name 🙂

It has organic certifications by QAI and Control Union per the packaging. 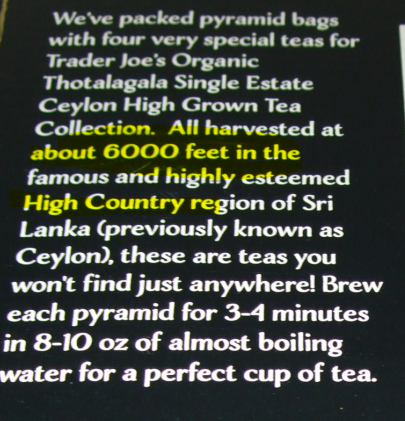 The package is 9.5 inches by 6.25 inches, and almost 3 inches tall. It weighs approximately 19 ounces after the outer wrapping is removed. The net weight of actual tea per the packaging is 4.23 ounces [I can’t measure this without ruining all the tea bags].

The empty packaging (without the four containers) weighs 8.7 ounces. The tea containers on their own weigh about 2.5 to 2.6 ounces each. 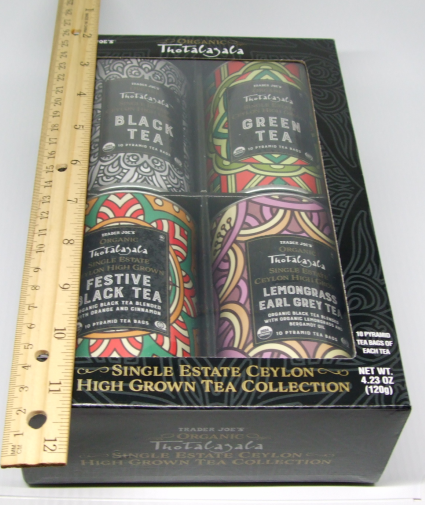 Each tea container is 4 inches tall and has a bit over 2.5 inches in diameter (not radius).

Inside, the four tea containers are wrapped on their own as well. There is already a scent of tea even before you unseal any of the four teas 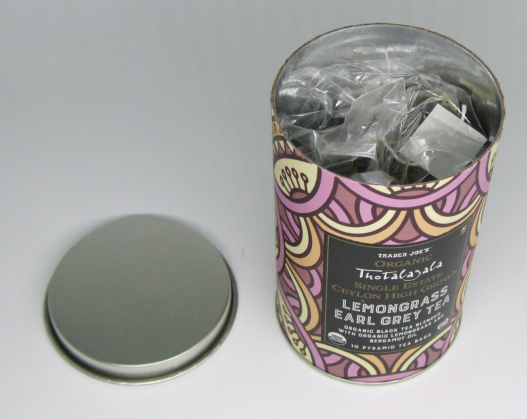 After you remove the wrapper, it’s time to open the tea container! The lid of each tea container sinks in the container, you just have to gently pull it upwards and it opens. The scent of bergamont is flowing out even with the ten tea pyramids still sealed in their own cellophane bag. 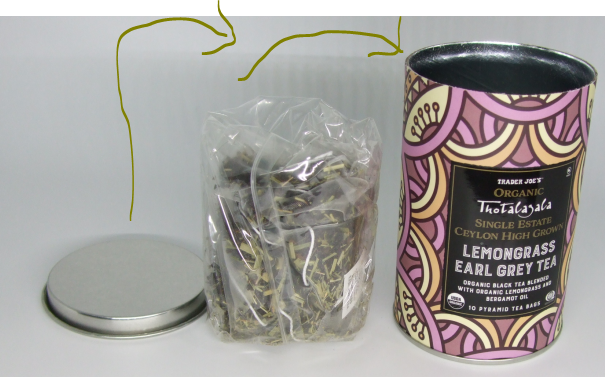 The ingredients are not printed on the individual containers, which are not for individual resale. Only the back of the packaging. There you’ll find the brewing instructions which are say 3-4 minutes in 8-10 oz of water in almost boiling water. There are no separate instructions per tea.

I’m not a materials expert, so I can’t really tell you what material is the tea container. It’s not heavy like typical tea tins but it’s shiny on the inside, but does not make metallic sounds when I tap it on the outside. It is definitely shiny though 🙂

And here are the four containers: 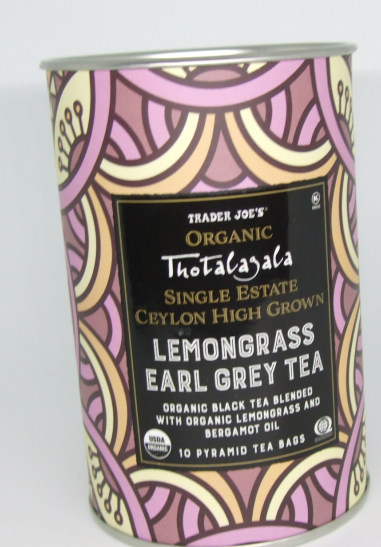 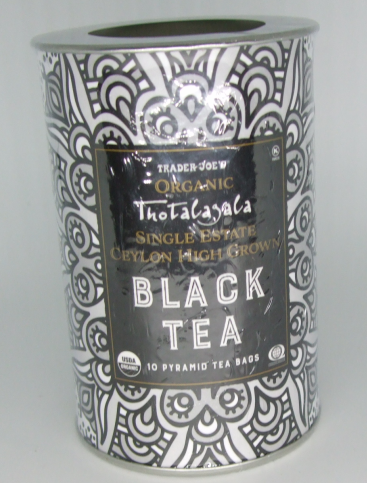 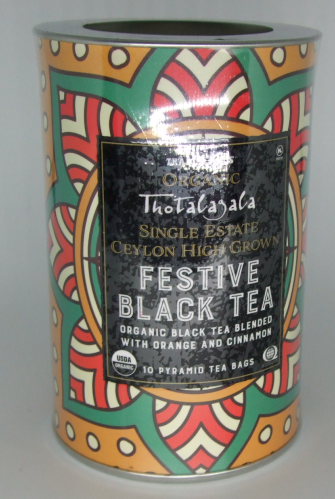 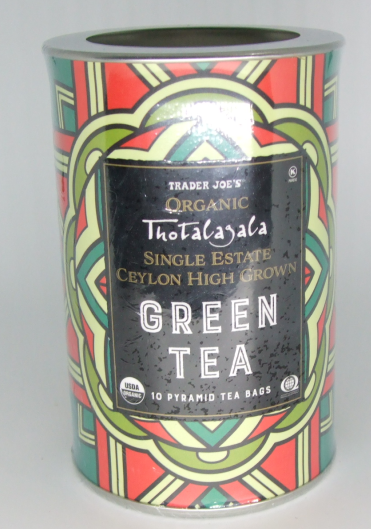 VERSATILITY – STORE THEM VERTICALLY TOO

You can also store the tea tins standing by for faster access. The lid closes, it’s not a perfect seal like when you store them horizontally, but it works 🙂 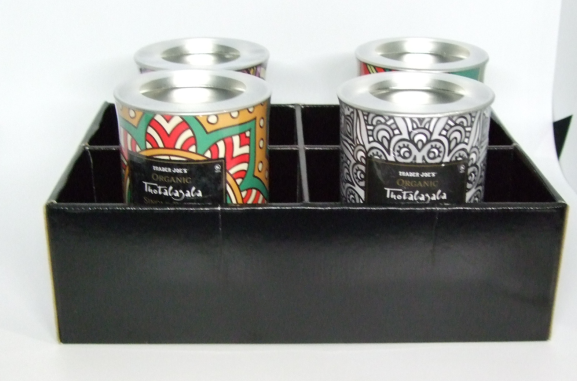 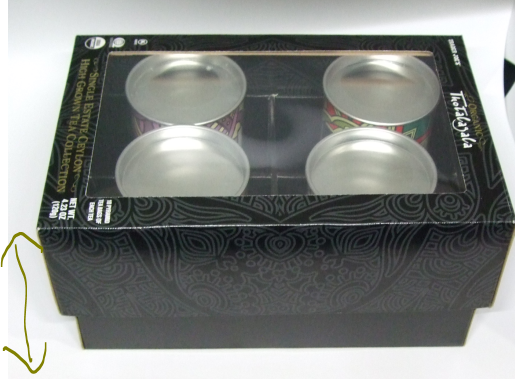 As you can see, the base can easily be reused after you are done with the tea. It’s a fairly solid cardboard, and has the matching see-through lid as you can see in the pictures above. You can use it for tea or arts and crafts, or anything else that is solid and not leaky 🙂

And here’s the sealed picture with the reflections from the cellophane wrapper thing: 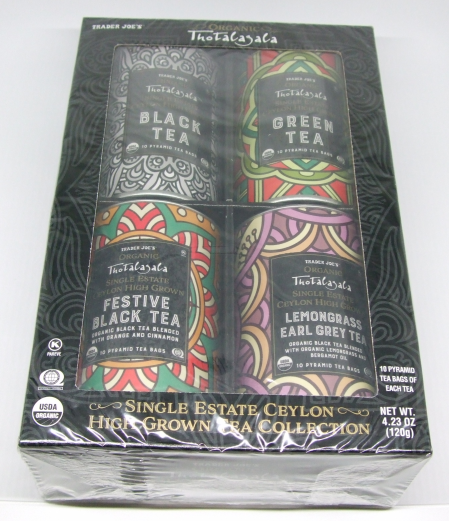 If you are not familiar with the name Thotalagala, here are a couple of easy ways to remember it:

There you go, very simple to remember and spell now 🙂

The packaging is nice and modest, it could make for a gift, or even something to take to a lunch or dinner party or some other event.

This is all organic, so it could make for a gift for a person or a household that is of the organic persuasion. Both the cardboard packaging and the four tea tins are reusable, so if you open them gently, you can make the most of them after all the tea is gone!

All these of course depend on taste. Stay tuned for my opinions on these four ideas as I drink them 🙂

HOW DO THE FOUR TEAS TASTE?

We have individual reviews for each one of the four teas:
+ Lemongrass Earl Grey Black Tea
+ Festive Black Tea
+ Black Tea
+ Green Tea